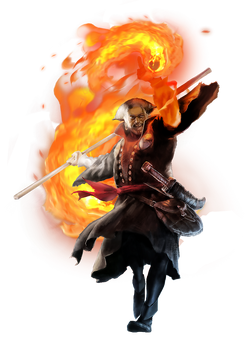 Since his birth, Zurbaran was a slave for a wealthy grandee of the Florios family. When his master found out about his magical skills, he was sent to the Academy of Al’Anfa. All his master intended was to find a cheap way to get his own house mage.

Eventually, Zubaran found a chance to escape. A little and an affair with a baroness later – Zurbaran feels like he is the world’s greatest dandy – he was imprisoned. He was found guilty having poisoning the baroness’s husband. Eventually, Zurbaran was sent to the same jail as where Naurim and the player’s character were imprisoned. Additionally to murder, Zubaran is also accused of seducing to adultery, imposture, fraud and spying.

As a slave of a wealthy family, he saw the perks and luxury of a rich man’s life right before his eyes, all the time. After his breakout, being free for the first time, he wanted this life for himself, with bath houses, money, slaves and women, of course. Therefore, Zubaran pretends to be a grandee himself – however, he’s lacking all necessary assets, though. Not only his appearance is fake, he doesn’t really care about his vows of fidelity he gives his counterpart, too. Especially not when making them in a moment of passion.

Therefore he is living a carefree life and believes that he can own the world. He would sell someone’s grandmother to get to what and where he wants, especially when a woman is involved. There are rare times, though, when even Zubaran shows cooperativeness.

With his mighty magic skills, Zurbaran is the perfect supportive addition to the party of playable characters.

Add a photo to this gallery
Retrieved from "https://blackguards.fandom.com/wiki/Zurbaran?oldid=5076"
Community content is available under CC-BY-SA unless otherwise noted.